by agw
If Mono is behaving as-per Windows then pressing O again (i.e. twice) should take you to the Options entry - either that or you can use up arrow once or down arrow a few times

Which distribution of Linux are you running on?

by rew
I'm running Ubuntu. I just upgraded to 'raring'.

There is a feature in some windowmanagers that I've grown to depend upon. It was introduced in twm somewhere in the nineties. It's that you can map actions to pressing one of the over 100 switches in front of you if your mouse is not over a window. Sometime in the past I noticed I could "upgrade" to a modern window manager, sawfish. Nowadays, they have something new again, which doesn't have this feature. So I have to hack a bit to get sawfish. That's where most of the "bad" things happen: With the sawfish window manager.

As a workaround I'm now running a second X-server with openbox (from LXDE) as the window manager.
I'm currently at work, and somehow I can't access the second X-server (at home) from here (shows only black). I'll try to have a look tonight.

[update] I now pasted this page into my browser at home so I'll see it when I AM home and not in the same situation as before....

On ios safari browser, i can't save any display options anymore. After reloading the page, the default settings are back! Any clue?

by agw
Ha - funnily enough I had an email from a chap in Ireland last week saying the same thing! He'd upgraded to iOS7 and mobile Safari was no longer storing cookies, which has the effect of losing any configuration changes after the page has reloaded. I would start by checking the privacy and cookie settings.

by rew
My trick to remind myself didn't work.

OK. Under sawfish, pressing O just makes the tools menu go away. But the cursor keys allow me to navigate to the right option in the menu. I managed to open the "options" menu under sawfish today.

agw wrote:Ha - funnily enough I had an email from a chap in Ireland last week saying the same thing! He'd upgraded to iOS7 and mobile Safari was no longer storing cookies, which has the effect of losing any configuration changes after the page has reloaded. I would start by checking the privacy and cookie settings.

After some unsuccesfull tries, here is the correct way to solve this problem:

In ''block cookies'', choose ''never''
Then go to safari, go to the website, choose the display options
And after that, go back to the cookies options and choose the middle option (between never and always).

It seems to work

by Sentry_e3
In my database there is an aircraft which doesn't want to accept my custom made logo. Don't know why, maybe because of the name of the previous logo is linked to the aircraft's data? Is there an other way than SQLite on firefox to update the logo name?

by agw
When you say it doesn't want to accept the custom logo, what exactly is happening? Is it just not appearing against the aircraft on the display? What's the operator ICAO for the aircraft?

agw wrote:When you say it doesn't want to accept the custom logo, what exactly is happening? Is it just not appearing against the aircraft on the display?

Exactly! There is just a blank instead of the logo. And no odd characters, just usual ones. The aircraft is the only one with this logo, so i'll try to use the icao code, correct?

Found a bug when clicking on the "Tracking X Aircraft" link on the Virtual Radar - Live Map Tab. 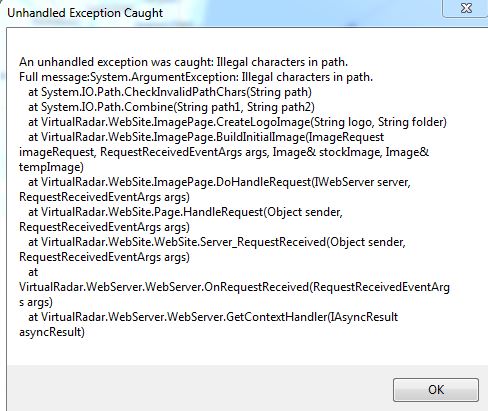 When adding batches, the program checks for leading zeros in the call sign. This is causing a couple of routes not to be displayed in the report.
e.g. I have a route who's call sign is NPT028E - its a cargo route but the call sign has the leading zero.

I've entered the route into your system as NPT028E but it removed the 0, which is fine but the '0' is needed to display the route correctly on the report and I cant get it to accept
the '0' batch updating system. So even though your system in correct and up-to-date, the route wont show up, if that makes sense?

Finally, and it not so much a bug but an addition but it is preventing submission of a new route.
I would like to add a new airline so that I can add a flight route.

EJA is it counterpart in the US but I cannot use that as the flight codes don't match - so you see my problem. I need an NJE recognised as a new airline please so that the route will be accepted.

Thanks
All times are UTC
Page 3 of 6
Powered by phpBB® Forum Software © phpBB Limited
https://www.phpbb.com/