Is Virtual Radar Server not behaving itself? If so then please report it here.
Locked
95 posts

Got his one, almost certainly as a result of me moving from a Dell Power Connect 2824 to a Cisco SLM2024. 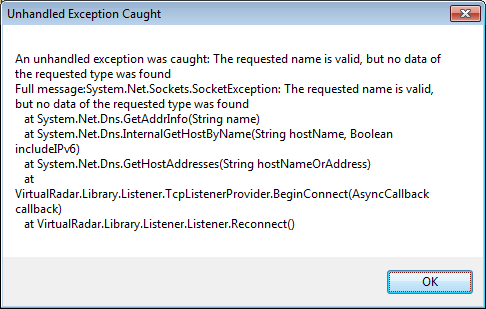 http://www.360radar.co.uk, the new name for MLAT Radar in the UK and Western Europe.

I install 2.0.2 and i don't have receiver range

but I have colour menu-options map

The receiver menu doesn't appear if you don't have at least one receiver that has a receiver location set for it. If you take a look here:

then that should hopefully any of what will probably be the most common questions about the receiver range plot.
Top

Thank you very much. I didn't name of my receiver location in options. Now it's everything ok

Not sure whether this is a bug or something silly in the respective receiver.

If you take a look at http://www.vrs-europe.org.uk and switch on RPi-2 and Astronet, you will see the offending spikes.

I would appear that all three sites locate to the same position. I wonder if we had some ducting...It can be proved if we know the time and the aircraft details.

Jon
http://www.360radar.co.uk, the new name for MLAT Radar in the UK and Western Europe.

I'm afraid not on pretty much all counts

The aircraft in question will have had to have sent a message within 30 seconds of the offending message that corresponds to a position that could reasonably be reached from the offending position (although at the moment the speed that the sanity checker will accept is quite high, I might make it more conservative in future versions). A range test is also applied - that's configurable in the raw decoding settings, by default it's 650 Km - anything further away from the receiver position than that is also ignored.

However you do get some aircraft that transmit the wrong position, I remember a Bluebird Cargo 737 a few years ago that used to transmit quite insane positions

I'll have a think about how best to detect and handle those. Recording the ICAO of the aircraft that produces the extreme range plot isn't a problem, it's more a question of how to present it and what to do with the information once you know which aircraft is causing trouble.
Top 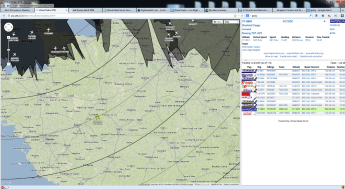 http://www.360radar.co.uk, the new name for MLAT Radar in the UK and Western Europe.

I'm getting an impression that 2.0.2 has some problem with plotting individual feeds. There are fewer aircraft plotted than before, almost as if it only plots those A/C UNIQUE in the feed, and not all the feed...? The pattern of the feeds quickly change, almost as if it only plotted the A/C if it was last seen from the chosen RX (i.e labeled with thet RX in teh merged feed). Am I making any sense here?

Anyone else seen this ?

Here are some other issues I have found;

1. Rebroadcast server on merged feed of Beasts does not work if set to "AVR" or "Pass-through". Does work on BS or VRS format. How is Pass-through intended to work if feeds are in different format? I would like to always get Beast / AVR Raw output , but AVR gives text format.

2. Feeds sometimes freeze, with TCP still connected. I have sen 1/5, 2/5 and all 5 feeds freeze on differentt occasions. A manual re-connect solves the problem but please add a check for incoming data. If no data in 60s, re-connect, regardless of TCP state.

3. When changing an active feed's properties (IP or port), VRS connects with the new settings, but the old feed is not closed, it's just invisible and can be seen with netstat.

4. Closed/abandoned rebroadcast server connections are not erased from list.

5. Got an exception error when using a DNS name instead of an IP adress for an RX. Is this supported?

6. Can't get polar plots to work, my xml file is under investigation....